⚀ Researchers need an objective measurement of muscle function in order to know whether their treatments are making a difference or not. In 2008, researchers took a questionnaire designed to measure function in ALS patients and adapted it to use with IBM. This test is called the IBM-FRS. This page will review the development of the scale and consider some of the problems associated with it. As well, another instrument, the sIFA, will be reviewed.

⚀ Here is the scale.

⚀ Seedat et al., (2014) considered 119 instruments. Noted that the IBM-FRS is a disease specific instrument that also includes environmental factors and covers a wide spectrum of activities by testing self-care and domestic tasks in addition to mobility.

□ Manual muscle testing (MMT), quadriceps quantitative muscle testing (QMT) and IBM-FRS significantly declined after one year (by 5.2%, 27.9%, and 13.8%, respectively). QMT of the quadriceps muscle and IBM-FRS were the most sensitive measures of disease progression. After a median time of seven years of disease duration, 63% of patients had lost independent walking" (Cortese et al., 2013, p. 404).

□ Together, these findings would support a role for IBM-FRS and quantitative muscle testing (QMT) of quadriceps muscles as important outcome measures in future therapeutics trials in IBM" (Cortese et al., 2013, p. 411).

□ The rate of progression of the disease as detected by manual muscle testing (MMT), QMT, and IBM-FRS was highly variable between different patients, as was the manner with which muscle weakness spread. No factors were identified which predicted decrease of either muscle strength or global function over one year.

□ In summary, during one year follow-up, the responsiveness of QMT of quadriceps femoris and of IBM-FRS were greater than MMT, which makes the former two measures more sensitive markers of disease progression" (Cortese et al., 2013, p. 411).

⚀ One of the criticisms of the IBM-FRS is that it does not include the perspective of the patient. This study by Demuro et al., (2016) developed an 11 item scale by using patient reported outcomes. Patients were interviewed and questions were generated.

⚀ The resultant [test] consists of 11 items scored on a 0 (no difficulty) to 10 (unable to do) numerical rating scale. sIFA items are aligned with the functional impact of sIBM as described in the literature and expert review, as well as identified as relevant and important to sIBM patients" (Demuro et al., 2016, p. 656).

⚀ The sIFA is designed to be self-administered, to gather direct patient input without the influence of others, and to assess change after treatment in a standardized manner. Items are scored on an 11-point NRS, and the recall period is the last 7 days" (Demuro et al., 2016, p. 656).

⚀ A study by Williams et al., (2016) reported the reliability and validity of the sIFA in patients with a clinical diagnosis of sIBM. "The sIFA is the only sIBM-specific measure that has been developed in alignment with the FDA Guidance specifically for use in clinical trials of sIBM therapies. In conjunction with objective measures of physical functioning, we also consider that the sIFA may be used in clinical practice to help monitor patient change. The psychometric results corroborated the findings from the qualitative research undertaken in the development of the sIFA. Collectively, the results indicate that the sIFA is a reliable, valid, useful, and appropriate measure of symptom status and physical functioning in patients with sIBM" (Williams et al., 2016, p. 664).

Items:
1 Stand from ordinary chair
2 Get up from the floor
3 Get on and off toilet
4 Walk on a flat, firm surface
5 Walk outdoors
6 Go up or down 5 steps
7 Step up and down curbs
8 Swallow liquids
9 Swallow solids
10 Carry a 5-pound object
11 Grip and use small objects

□ Using this framework, it is evident that there is a lack of validated patient-reported outcome measures to assess disease aspects important to patient, and that no studies have evaluated life-style factors such as physical activity in these patients" (Espinosa-Ortega et al., 2017, p. 591).

□ Another functional evaluation recently used in myositis is the walking test. This test measures the distance that can be walked within a standardized period of 2 or 6 min (2-MWT or 6-MWT, respectively)" (Espinosa-Ortega et al., 2017, p. 593).

□ The sporadic inclusion body myositis physical functioning assessment (sIFA) was recently developed and validated, specifically for patients with IBM. To ensure content validity, the questionnaire was based on a literature review, interviews with expert clinicians and on individual interviews with patients. Data were analyzed qualitatively and patients were then included to discuss the questionnaire's content, wording and scaling. The sIFA consists of 10 items divided in three subscales: lower body functioning (standing up from sitting, getting on and off a toilet, walking on flat ground, walking on uneven or sloping ground, climbing five steps, stepping up and down a sidewalk curb), upper body functioning (carrying a five-pound object, gripping small objects like a key in a lock or tying shoes) and general functioning (getting off the floor or ground, swallowing). Each item is scored on a numerical scale from 0 to 10, with a total score ranging from 0 to 100, where 100 indicates severe limitations" (Espinosa-Ortega et al., 2017, p. 594).

□ The adult myopathy assessment tool (AMAT) scale is a recently developed 13-item physical performance test that encompasses two subscales: a functional (range 0-21) and endurance (range 024) scale for a total score ranging from 0 to 45. It does not require any specialized equipment, and it may be completed within 20-30 min. The two domains reflect the contribution of impaired muscle force on functional limitations and incorporate the fact that excessive fatigue may interfere with physical performance and activities of daily life" (Espinosa-Ortega et al., 2017, p. 594). 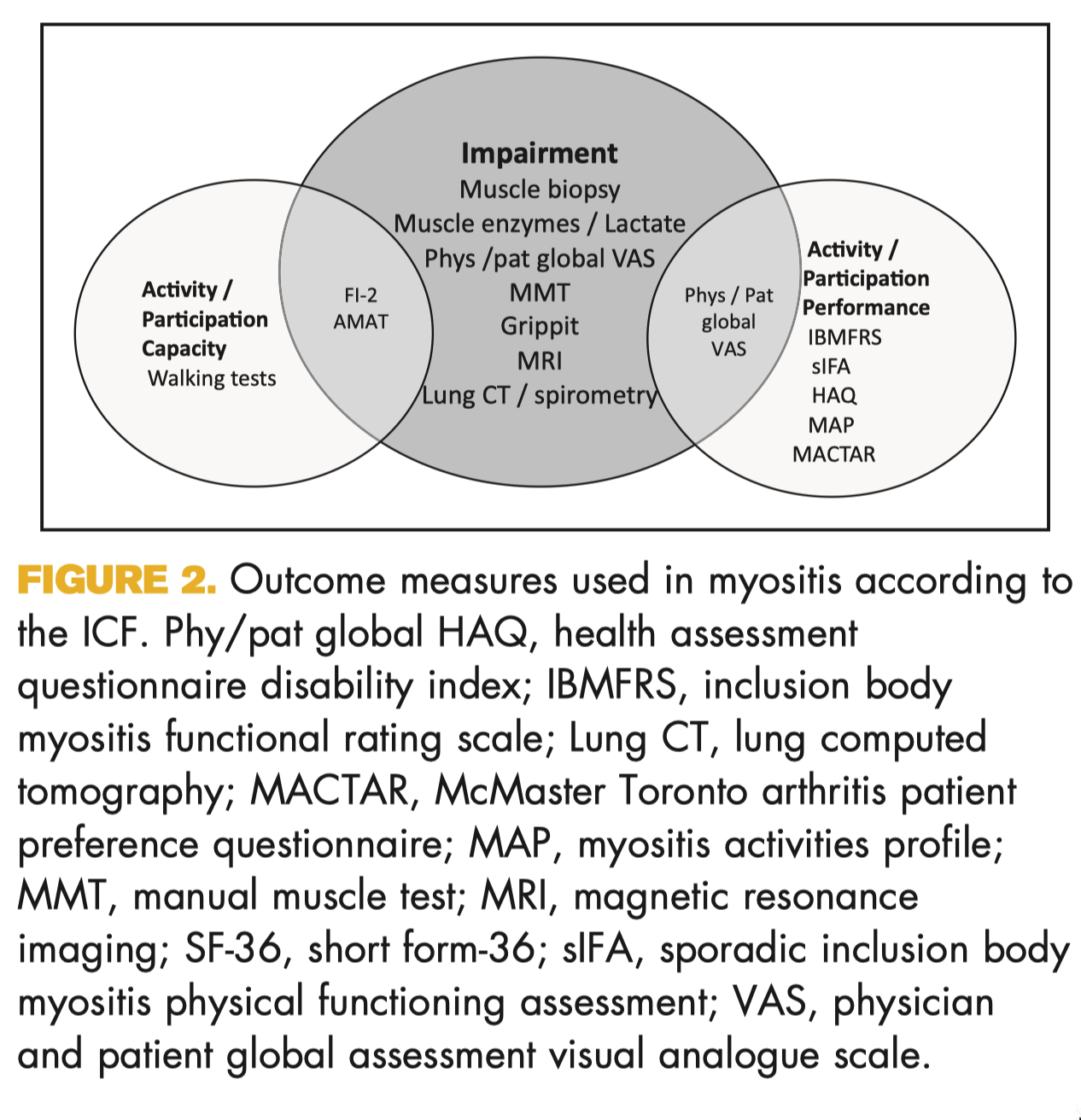 □ The inclusion body myositis functional rating scale [40] is the first functional scale developed exclusively for IBM clinical trials and should be performed as an interview and not as a self-reported questionnaire. It can be administered in less than 10 min and is sensitive to change over time" (Espinosa-Ortega et al., 2017, p. 594).

□ The first patient-reported, diagnosis-specific outcome measure based on patients' experience derived from qualitative methodology was recently published for patients with IBM, the sIFA. The functional index-2 (FI-2) and another newly developed measure of impairment, the AMAT, are the only myositis-specific measures of impairment created for adults with myositis" (Espinosa-Ortega et al., 2017, p. 595).

⚀ Reference for the FI-2: "The FI-2 is the first partially-validated and reliable disease-specific measure of impairment in patients with PM and DM. The FI-2 contains no redundant tasks, has no ceiling or floor effects, and possesses satisfactory construct validity and interrater and intrarater reliability. It is not time-consuming to administer, is well-tolerated by patients with all stages of disease, and does not require any expensive equipment or formal training" (Alexanderson et al., 2006, p. 119).

⚀ Reference for the AMAT: "Results of this study suggest that physicians and physical therapists may reliably score the AMAT for adult subjects with myositis, following a single training session. The AMAT functional subscale, endurance subscale, and total score exhibit interrater and intrarater reliability suitable for clinical and research use" (Harris-Love et al., 2006, p. 119).

□ The second scale, the IBM-FRS-LL, is focused on the lower body and includes items like turning in bed, sitting to standing, walking, and stair climbing. As well, the upper scale or lower scale can be used independently or, both scales can be combined to provide a single outcome measure; the IBM-FRS-9.

□ The validity of the scale with regard to the patient experience has not been explored, and the next stage of this work is to develop a patient-reported scale that can be completed face to face or administered over the phone. This must be developed in close collaboration with people with IBM to develop the items and then be tested on a sample of patients" (Ramdharry et al., 2019, p. 168).

□ In the optimization of the statistics of this test, the swallowing item did not conform to the upper or lower item selections and therefore it appears as an independent item.

□ Here are the scales.

⚀ In an editorial, Schmidt (2019) reflects on the endpoints used to assess success. It is very important to have reasonable/credible goals in evaluating clinical trials.

□ In the RESILIENT study, [see Hanna et al., 2019] an increase in lean body mass was observed in patients who received 3 mg/kg or 10 mg/kg bimagrumab, but no improvements in the primary endpoint-change from baseline in 6-min walking distance (6MWD) were seen. Secondary endpoints were also not significantly different between patients receiving the drug and those taking placebo, including the quantitative muscle strength of the quadriceps, hand grip and pinch-grip dynamometry, frequency of falls, and swallowing performance. Scores on the inclusion body myositis physical functioning assessment (sIFA) questionnaire were the only endpoint to show a significant improvement, in the 10 mg/kg group, compared with placebo" (Schmidt, 2019, p. 807).

□ [In comparison to the 6MWD] "Other primary endpoints—e.g., the inclusion body myositis functional rating scale or the sIFA score—might be more reliable and, in addition to walking ability, capture several items of daily life that are usually affected in patients with inclusion body myositis" (Schmidt, 2019, p. 808).

⚀ In user groups, it is common to see discussions referring to three categories. In a CureIBM website by Kevin Dooley, November 5 2018, it states the following: "Jerry King [an IBM patient] has advocated that the IBMFRS score should be used as a severity rating for IBM, as follows:"